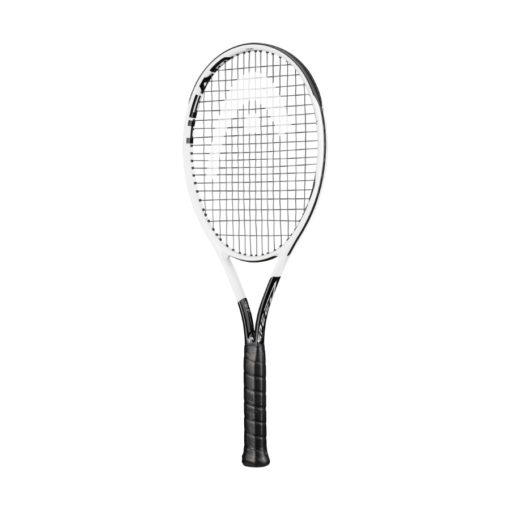 HEAD GRAPHENE 360+ SPEED MP Tennis Racket 2020  With its Graphene 360+ technology, the HEAD Speed series offers the perfect blend of flex and stability with an enhanced energy transfer from racket to ball.  A fast game needs a fast racket – and this is it !

The 360+ SPEED MP is slightly lighter than the PRO and provides the silo’s chracteristics in an easier-to-handle version, for a wide range of players.

It comes with the new Graphene 360+ technology, a combination of Graphene 360’s energy transfer and innovative spiralfibers for an enhanced flex and clean impact feel as well as a 16/19 string pattern for enhanced spin during fast rallies.

It features the new Graphene 360+ technology, a combination of Graphene 360’s energy transfer and innovative spiralfibers for an enhanced flex and clean impact feel. Just like the rest of the speed silo, the Speed PWR scores with a new design with an asymmetric combination of matte white and glossy black.

Buying a new racket is a great chance to visit our store at Farnham, in Surrey.  PURE RACKET SPORT specialises in only racket sports and has a large range of all you will need for your Tennis.  Try out this Tennis Racket and our range of HEAD Tennis demo rackets in store in our HITTING ROOM.  We here to give advice and guidance about which model might be best and explain how the new technology can improve your game.

Head Sport was founded in the United States in 1950 by aeronautical engineer Howard Head. In the late 1960s, a tennis division was created when Howard Head figured out a way of strengthening the tennis racket by introducing the aluminium frame.  The idea became a success and was first introduced in the 1969 US Open.   In 1975 , one of the tennis players that Head sponsored, Arthur Ashe, incredibly won Wimbledon, defeating the favoured Jimmy Connors.  In 1997, Head created the first titanium and graphite tennis racket.   Head proved to be successful in 2012, with three Major winners during the year : Novak Djokovic at the Australian Open, Maria Sharapova at the French Open and Andy Murray at the US Open.  Head started integrating graphene into their rackets in 2013.